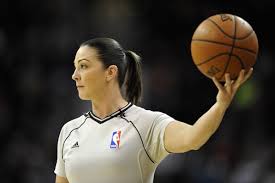 I wanted to bring awareness to International Women's Day by celebrating women that are doing their thing within what was once a male dominated career.  To go along with the theme of my blog being about a fit and healthy lifestyle, I wanted to keep my focus for my featured woman as someone making great strides in a sports centered role. Traditionally, male sports have dominated American ratings. The men's leagues have often consisted of men taking on the multiple roles of officials and the various administrative and operational roles of the team.  This is why I felt it was important to feature NBA official Lauren Holtkamp; the third woman in history to become a full time NBA referee (wikpedia.com). At thirty-six years old, Holtkamp is a former college basketball player for Drury University (2000-2004) and a former WNBA official where she officiated four seasons including WNBA 2014 conference.  She has been an official for the NBA since the 2014-2015 season.


If you search Lauren Holtkamp online, you will find that despite she is only one of few females to work in her current position, she doesn't let that notoriety define herself and her role.  In a 2014 USA Today Sports article, she portrays a confidence with doing her job and doing it to the best of her ability and knowing her training has prepared her to perform in a way that she has earned the opportunity to work as an NBA official.


As much as there is acceptance in 2017 within society for a female taking on what was once a male dominated role, there are still gender biases that women are subjected to from various sources- reporters, colleagues, and in Holtkamp's case, NBA players.  Whether the media propagates issues to create drama for their stories, there is one issue that seems to be repeating itself between Holtkamp and Chris Paul a NBA L.A. Clippers player.  In a series of technical fouls given to Chris Paul by  Lauren Holtkamp in two separate instances, many began to wonder if there was a beef between the two or just an unfortunate coincidence (or perhaps an official just doing her job?) The first was during a game in 2015 against the Cavaliers where he publicly criticized Holtkamp to reporters about her role as an official.  The NBA fined Paul $25,000 for what was deemed a sexist remark. A year later, Paul received another technical foul in a game against the Timberwolves where he wasn't happy about the call but decided to learn from his previous fine and keep his comments about the incident to himself.  Chris Paul has denied his previous remarks as being sexist.  Whether he communicated poorly to reporters post game or was talking out of emotions, the remarks were said and the NBA acted as they felt appropriate.  It is quite clear that the NBA is taking any gender biased remarks about women within their franchise as a serious matter and won't tolerate anything that disrespects anyone based on their gender and role.  This is just one example of the many biases women have experienced as they pave the way for women entering male dominated roles.  There may be a day where women like Holtkamp being an NBA official down on the court won't be a second thought.  Until then, I commemorate Lauren Holtkamp and all those who came before her for their determination to pursue a career they felt passionate about despite it seeming to be a challenge for them simply because of their gender.
Posted by Kobajo84 at 9:00 AM

Email ThisBlogThis!Share to TwitterShare to FacebookShare to Pinterest
Labels: Lifestyle