This month's challenge is moving along.  I've discovered I could do moves on the pole that I'd never imagined trying.  That's one of the fun things about pole fitness; it's always an adventure.  There were a few letters I found myself scratching my head on however, with the help of instagram and the ability to search using the pole dancer hashtag protocol, I was able to complete my list of moves that start with each letter of the alphabet.  Some of the moves surprised me along the way.  Certain moves that I thought would have been easy were actually harder while some of the harder looking moves were pretty easy to pull off.  Below is my list of moves and my break down of each.

J: Janiero. It's been a couple years since I last tried this move and I was surprised to nail it after two 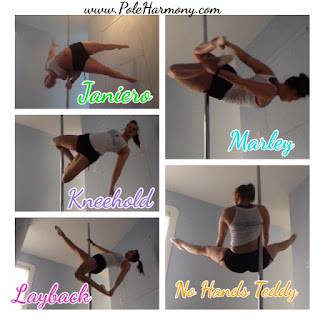 tries. The arm placement tripped me up at first but once I figured that out, the hip balance came right back to me.

L: Layback variation. I found this pose on instagram and loved it! Very easy and very pretty.

M: Marley. Another move I haven't attempted for a couple years.  This one looks pretty tight and after reviewing others doing this move, it appears my tight quads are keeping this move from opening up and looking as beautiful as I'd like it to on me.

N: No handed Teddy or V legs. I couldn't think of a move that starts with the letter N so I got creative and threw in the no handed teddy.  A staple and a long time favorite move that needed to be included on this list.

O: Ornament. I realize its not officially called the Ornament but this is actually what I used to call this move or also the Hood Ornament rather than the Figurehead.

P: Pencil. Entered using the iguana mount.  I tried deadlifting into it and with all my yoga headstand practice I was surprised it didn't happen.  It's pretty hard to tip your hips over your shoulders in this grip.

Q: Queen. Another pose found on instagram and surprisingly really hard to get into.  I got into this 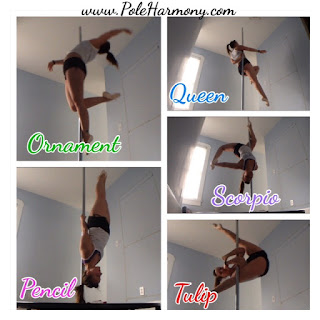 one from a side climb.  This one took me more attempts than I'd care to admit.

T: Tulip. Never tried this one before.  I like it.  At first there was no way I was going to elbow grip it for fear I may fall.  I finally got the courage after a few times up on the pole when regular grip wasn't getting me into the shape I wanted and like magic the elbow grip pulled me in to a nice little pancake looking side straddle on the pole.

I realize this blog post is a couple days ahead of schedule so I will pick back up on Monday with my letters U and V as video uploads and complete the list in next Thursday's progress post.